The Renaissance is more than the famous English King, and media is just starting to realise that.

The historical period of the Renaissance, when depicted in television has become nowadays synonymous with the Tudor Era, specially with the figure of Henry VIII. While his importance in History cannot be denied, sometimes it feels like his story is one that has been overrepresented in media. More precisely his relationship with Anne Boleyn (while the other five wives wait in the shadows for a proper representation of their lives). But the Renaissance was an incredibly rich period in european  and world history,  full to the brim of characters as colourful as those that you could find in the Tudor Court, and whose stories deserve as much exposure.

Ferdinand (Rodolfo Sancho) and Isabella (Michelle Jenner) in a still from the series Isabel
(RTVE)
These three recommendations in one might sound like cheating at first, but since the latter two act as sequels of the first, we could consider them as parts of a whole. Together, they explain the very important role that Spain came to have in the sociopolitical sphere of the Renaissance.
Of course, we start with the story of Isabella of Castile, AKA the Catholic, comprised in the three seasons of Isabel, that go from her entrance at the Court of her half-brother Henry IV and her ascent to the throne, to her death.  As it can be gathered from such an eventful life as that of Isabella of Castile, there is no dull moment and the series doesn’t shy away at showing the light and darkness of the life of this queen.
It has a stellar cast that brings on brilliant performances, specially Michelle Jenner in the title role, but other examples to watch are Ramón Madaula as her mentor, Gonzalo Chacón (his reaction to her death is probably, in my humble opinion, one of the most heartbreaking moments in Spanish TV), or Irene Escolar as Joanna of Castile (AKA the Mad). It can also boast of great screenplays, filming on the actual locations where the historical events happened, and a display of costumes that had not been seen until that moment in Spanish TV.

The funeral of Philip the Handsome in La Corona Partida (RTVE)
It was followed by the tv movie La Corona Partida (The Broken Crown), which takes place between Isabella’s death and the imprisonment of her daughter Joanna in Tordesillas. Just as Isabel becomes an acting vehicle of sorts for Michelle Jenner to show her acting chops, La Corona Partida is that for Irene Escolar.  (And let’s be honest, they both have it in spades)

Charles I (Álvaro Cervantes) and Isabella of Portugal (Blanca Suárez) in a still of Carlos, Rey Emperador (RTVE)
And even if it was released before the tv movie, Carlos, Rey Emperador acts as its secquel, narrating the reign of Charles I of Spain (Álvaro Cervantes), Joanna’s son. Even if it can boast of pretty much everything that its predecessors can, it suffers from a small but important problem:  the whole reign of Charles, and many other storylines such as the courts of Francis I of France, or, yes, Henry VIII, or the voyages of Hernán Cortés, were cramped into a season.
Nevertheless, I insist that the three should be considered as parts of a whole. And a highly enjoyable and informative whole at that.
2. Maximilian: Das Spiel von Macht und Liebe (Austria- Germany, 2017)

The cast in a promotional image from Maximilian (ORF)

This was the luckiest of all finds, and the hardest too since it was impossible to get no matter the way I tried.
But when I finally found it through Movistar TV, and under the Spanish title of Borgoña (No comments.), I actually went through the whole miniseries in one sitting because it was tremendously engaging.
Even if the title just focuses on one of the protagonists, Maximilian tells us the story of Maximilian of Habsburg and Mary of Burgundy. The troubles each of them was facing before their marriage and how their union, at first political, became one of love.
I have to admit I knew next to nothing about them before I started watching the show (aside from them being tihe paternal grandparents of the aforementioned Charles I), but I followed their story with interest. This being helped again by performances, specially that of Christa Theret as Mary of Burgundy, who carries a lot of the emotional weight of the story.
Also, the costume design and the hair department deserve special accolades because you rarely see this period done with such an accuracy in those aspects.
3. The Shadow of the Tower (England, 1972) 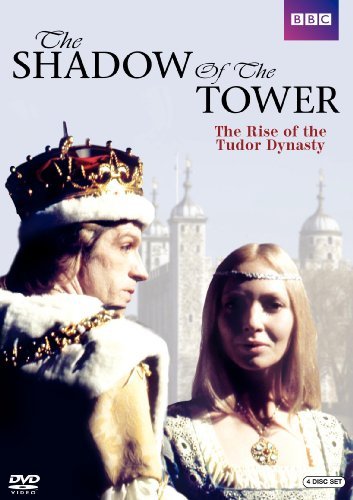 Yes, I know. Tudors. But not Henry VIII, bear with me.
Instead, The Shadow of the Tower takes upon the story of Henry VIII’s parents, Henry VII and Elizabeth of York. The marriage that united a divided England after the Wars of the Roses.
Despite of its rocky origins (He was a Lancaster, she was a York, opposing sides of the war), it was a loving marriage that managed to survive the several attempts to depose him.
Even if their story has been told again this year through The White Princess*, and the production values of The Shadow of the Tower look quite a bit dated (as happens with most of the BBC productions of the 70s), this one happens to be more historically accurate while at the same time being tremendously entertaining. This is due mostly to the performances of the cast, specially that of James Maxwell, who brings to the screen a really nuanced portrayal of Henry VII (Aside from being an absolute deadringer to the original Henry)
*(This show and the novel, and the rest of the novels of Philippa Gregory, are more fiction than fact.)
4. Medici: Masters of Florence (USA-Italy, 2016, with a second season soon to air in 2018)

Cosimo de Medici (Richard Madden) in a promotional image for the series. (Rai)
Even though there are also a plethora of series about the Borgias, the Medicis, the other great family of the Italian Renaissance, have not been as lucky.
That, at least until last year, with Medici: Masters of Florence, a co-production between Italy and the USA that goes to the very beginnings of the family to tell the story of Cosimo the Elder (Richard Madden), the man who orchestrated the ascent to power of the Medici in Florence.
While it has its fair dose of fiction (I was surprised to learn that the story of Lorenzo, Cosimo’s brother, was very different from real life), it is a good start for the story of this family which shaped the history of not only Italy, but of Europe.
It will continue with two more seasons dedicated to the time of Lorenzo the Magnificent. The first of  them will air next year.
5.  Muhteşem Yüzyıl (Turkey, 2011-2014)

The cast of Muhteşem Yüzyıl in one of the promotional images for the series (TIMS)
The Ottoman Empire is, to many, the great unknown of the Renaissance. At least in Spanish schools the only mention of it is when Don Juan de Austria defeated the Ottoman fleet in the Battle of Lepanto. So when I caught news of  Muhteşem Yüzyıl, a series about the Court of Suleyman the Magnificent, I knew I needed to watch it.
While the fact it verges more into the soap opera territory than what I expected at first, and the controversy the series caused in Turkey made me slightly wary, this series is absolutely addictive and highly recommendable. To the point that I’ve watched it in Turkish despite having no idea of the language.
(Even though I have to admit that certain things, like the inclusion of the “spanish princess” in Season 2, amused me to no end.)
The four seasons of this show were followed by a two-season sequel/spin-off about the life of Kosem Sultan called Muhteşem Yüzyıl: Kösem. (Which technically takes place in the 17thC, so that is why it is not included in this list.)
One can only hope that producers (and some viewers) realise that they’ve pretty much have a mine of stories in this period of History, and follow the example of these shows with more variety, and not the same old, same old. Because the Renaissance is worth it.
As for me,  I will wait with bated breath for a movie or show about Katherine of Aragon that depicts her as more than the old discarded wife. Because she was more than that, as examples like her victory in Flodden against the Scots show us. Here is a recording of the letter she wrote to Henry after that victory:

The content in this site is free for everyone, but I wouldn't say no to a coffee./El contenido de este sitio es gratuito para todos, pero no le diría que no a un café.