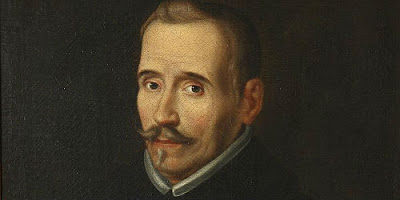 The story of the Spanish writer’s last love seems right out of one of his plays.

Sometimes you stumble upon stories that make that saying of “truth is stranger than fiction” eerily true. Sometimes those stories steal your heart in the most unexpected of ways. Sometimes they make you wonder why there isn’t a plethora of books and movies regarding said stories so everybody can nerd out (and cry) with you.

(Then you remember that there’ll probably never be one because you are neither American nor British and the financing for that stuff in your country is fairly scarce, but nevermind. Apologies for the detour and back to the post.)

This, for me, is one of these stories.

It involves one of the best writers in Spanish language, Lope de Vega (for those who don’t know him, Wikipedia is your friend, my friends), who, at the age of 54 had already have a fairly intense love life, and had been ordained priest. But still, he was the very epitome of the charming silver fox.

And obviously, this was noted by our other protagonist, Marta de Nevares, who happened to be 25 at the time they met in 1616. Marta was not only a noted green-eyed beauty, but she was also a poetry aficionado with an interest in music (she knew how to sing, play instruments and dance) and theatre.

So not only it was love at first sight, but it became what was to be the last great love of Lope’s life.

But there was a teensy weensy problem: Aside from Lope being a priest, Marta was married.

She had been married against her will when she was 13, to a merchant named Roque Hernández de Ayala, a brute that mistreated Marta.  Lope himself wrote against him several times.

Still, neither her husband nor the gossiping that comes around stops Lope and Marta from moving to Lope’s house and continuing their affair.  Marta becomes Lope’s lover and muse, appearing as Marcia Leonarda in his novels, and as Amarilis in his poetry and letters. Despite all the scandal, Marta gives birth to a daughter, Antonia Clara, in August 1617, and to a stillborn son in 1618. This same year, Lope suffers an attempt on his life by Roque, Marta’s husband.

Despite the loss of that son, it looks like our couple seem to be working out the way to complete happiness. In 1619, Marta manages to win a sentence against her husband regarding her dowry, and in 1620, Roque dies, leaving her completely free. Lope writes about this in the dedication of La viuda valenciana (The Valencian Widow) which itself has been speculated to be based in Marta’s story:

I can assure thee that he took revenge on us all with only the doubt we had if he would die or stay: such was the wish for him to leave: not because he would be missed, but because having imagined that he would leave, the idea of seeing him again would sink us all into despair.

But alas, it was despair of another kind what would marr the happiness of our couple.

In 1623, Marta goes blind. Shortly after that, she begins suffering from mental illness.

But Lope stays by her side. No matter if he is already old, and suffering from health problems himself, so pretty much in not of the best conditions to care for a disabled person that also happens to be mentally ill. He stays and he will care for her until the last of her days, even noting in his correspondence the moments when there seems to be some improvement.

Nine years later, in 1632, Marta dies. Lope would later dedicate to her the Égloga a Amarillis (Eclogue to Amarillis), and the sonnet Resuelta en polvo ya, mas siempre hermosa (Already lying in dust, but forever beautiful) that you can listen to here.

Two years later, Lope and Marta’s daughter, Antonia Clara, would elope with a servant of the Count-Duke of Olivares. Lope was never able to recover from this blow and died a year later.

But that, my friends, is another story.

One Reply to “The greatest love story you probably never heard about: Lope de Vega and Marta de Nevares.”

The content in this site is free for everyone, but I wouldn't say no to a coffee./El contenido de este sitio es gratuito para todos, pero no le diría que no a un café.